A data store is a device type used for writing the savesets directly on one or several configured storage locations – into the file system. Data store configuration consists of specifying data store capacity and watermarks: HWM and LWM.

SEP sesam uses a data store instead of a conventional media pool to define storage repository. The data is still primarily backed up to a media pool, however a data store is used underneath to save data to dynamically managed data areas, including disk backups.

Depending on the SEP sesam version, the data store window might be slightly different, but the configuration remains the same across various SEP sesam versions. As of version 4.4.3 Grolar, a few additional options are available: new data store type NetApp Snap Store, S3 credentials, Si3 State, Si3 Repair Area. For details, see How to manage a DataStore .

The difference beween a conventional media pool, typically used for backing up directly to tapes, and a data store is in defining the storage space directory directly in the drive by using the operating system's partition functions. Therefore the data store space is managed at partition level.

Another difference is that when a data store becomes full during backup, the saveset will not be split up. Instead, the backup will be aborted. You should consider this when specifying the data store capacity. For details, see Data store calculation recommendations below.

As shown in the illustration below, a media pool still points to a drive group. However, there is now an additional level of one or more data stores between the media pool and the drives. The connection between a data store and the related drive is static.

When specifying the capacity value, a dedicated partition must have enough free space. From SEP sesam version 4.4 onwards, the method for calculating the required disk space is:
space occupied by Sesam + free disk space = DS capacity

More than one data store is required in a media pool only if the media pool uses data from several disk partitions, in which case all the drives of a media pool's data stores must be part of the same drive group. This ensures that the SEP sesam queue manager distributes the backups in this media pool to all data stores (balancing). For details on drive groups, see Drives.

The oldest free savesets are deleted first. Purging is done until the low watermark is reached. When setting the HWM parameter, you should ensure that sufficient space is allocated between data store capacity and HWM for a complete full backup. For details, see Data store calculation recommendations below.

Events that trigger the data store purge are:

The manual execution of the data store purge process deletes obsolete (EOL-free) savesets. Another option is to clean up a data store (≥ 4.4.3. Tigon V2), as described below.

As of 4.4.3. Tigon V2, you can manually remove orphaned savesets from the data stores by using the new Clean up option in the Data Stores content pane, thus releasing the space that might be occupied by orphaned savesets. This is useful in cases when a data store seems to be inaccessible, its storage space is occupied, or SEP sesam space check shows non-sesam data.

I. How to set up a data store

II. How to manage a data store 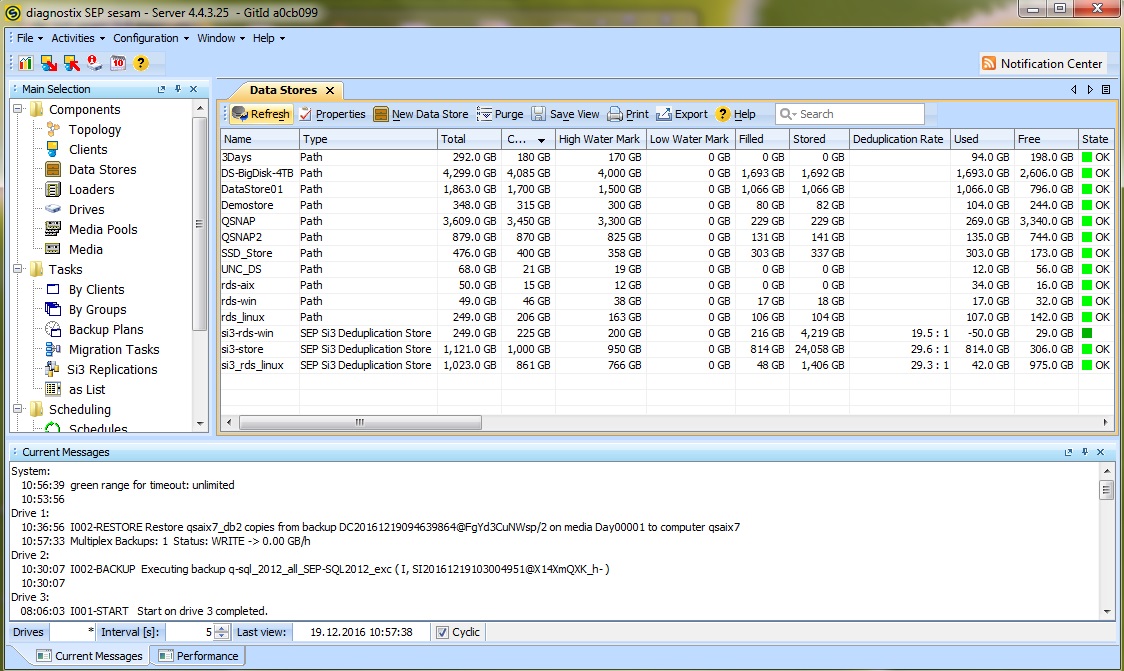 The following are the properties of a data store:

Capacity
The size (in GB) of the partition available for backups.
Filled
The size (in GB) of the occupied data store space by SEP sesam.
High Water Mark
HWM treshold – the upper value (in GB/GiB) for the used disk space on the data store. When this value is reached, a data store purge process is started for all EOL-free savesets thus freeing up data store capacity.
Low Water Mark
LWM treshold – the value (in GB/GiB) for savesets with expired EOL. If LWM is set to 0 (default), the EOL-free savesets are removed from the data store at the next purge. For the deduplication store the LWM is not editable.
Total
Maximum available space (in GB) on the partition as reported by the operating system.
Used
Total used space (in GB) on the partition.
Free
Available disk space (in GB) for SEP sesam.

Selecting a data store and clicking the tab Savesets opens a list of all savesets with their details. You can change EOL of individual saveset, adjust backup-related EOL, and lock or unlock individual saveset.

Saveset EOL
The column Saveset EOL enables you to change EOL for each individual saveset, stored on the respective data store. You can extend or reduce its retention time. If the adjusted saveset is a part of a backup chain, the whole chain is affected. See EOL-related backup chain dependencies.
Backup EOL
The column Backup EOL enables you to adjust EOL for all savesets containing the same data. This backup-related EOL is applied to all savesets with the same data, including migrated and replicated savesets.
For example, adjusting EOL of a migrated saveset from 2.12.2016 to 12.12.2017 results in changed EOL for all related backup data, i.e., original backup, replicated backup, as well as for all backups in a backup chain, if a saveset with adjusted EOL is a part of it.

How to set up a data store – Configuring Si3 Deduplication Store
Retrieved from "https://wiki.sepsoftware.com/wiki/index.php?title=The_DataStore_4.4&oldid=135857"