By default, SEP sesam uses Microsoft VSS to create volume shadow copies of data for every file system – Path backup of a Windows client. The option Backup with VSS can be disabled/enabled when creating a backup task or in the backup task properties, as described in the section Disabling/enabling VSS-based backup. It is also possible to exclude only specific VSS writers, as described in Manually excluding a VSS writer from backup.

Microsoft Volume Shadow Copy Service (VSS) is a Windows service for backing up running applications. VSS coordinates with other VSS-aware applications and services, and creates a shadow copy or snapshot of data for backup purposes. VSS uses a copy-on-write snapshot, allocating a small temporary storage space for it. This does not occupy a lot of space as a snapshot only contains the data that has changed since the snapshot started. Once the snapshot is completed, the temporary storage space is freed up again.

If there are any problems with shadow copies remaining and occupying your disk space, check Microsoft tools Diskshadow and VSSadmin to manage and delete shadow copies.

The VSS architecture includes the following objects and services:

SEP sesam backup with VSS supports copy, full, differential, and incremental backups of the file system, therefore the option Backup with VSS should only be used with the task type Path. All other task types, for example System State, use the required VSS writer by default.

When performing a VSS backup, SEP sesam as a requester requests a backup of the file system data specified in the backup task. VSS writers communicate with running applications and ensure that the data is set to a consistent state and to stay consistent during the shadow copy creation. SEP sesam backs up the selected data immediately after VSS takes a snapshot of the selected data. Once the backup is complete, VSS instructs running applications to resume normal operation. The file system data on the saveset is stored with the original location, e.g., C:\. This enables standard restore of data backed up with VSS. For details, see Standard Restore Procedure.

In the Main Selection -> Tasks -> By Clients, select your Windows client and then click the backup task for which you want to change the properties or click New Backup Task if you are creating a new task. After setting the task properties, disable (or enable) the option Backup with VSS. By default, the VSS backup is enabled.

Backup with VSS activates all of the available VSS writers. If you want to exclude a specific VSS writer from the backup, proceed as described in Manually excluding a VSS writer from backup. 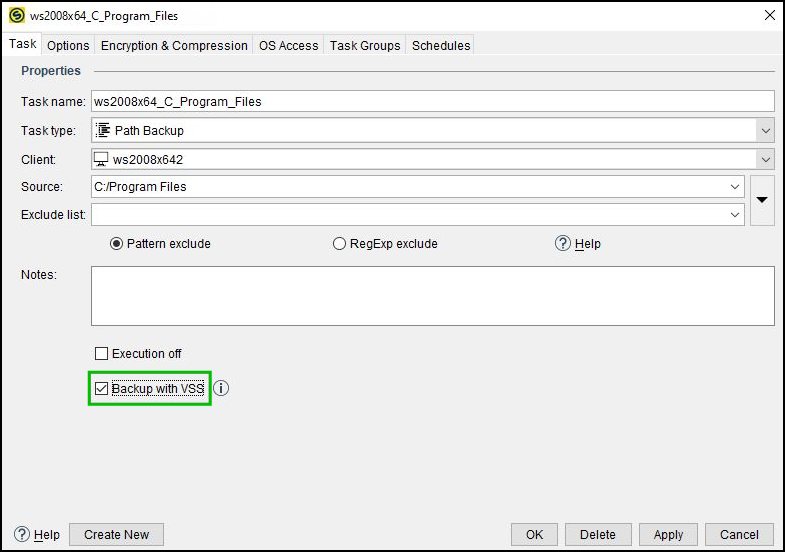 Application specific VSS writers are used to coordinate and prepare application data for snapshot creation while it can still be in use. The following Windows software and services support VSS: Hyper-V, SQL Server, Exchange Server, SharePoint, Virtual Server, Active Directory, DHCP, WMI. You can exclude a specific writer from the backup, if it is not needed for your current backup task (e.g., exclude a Hyper-V writer because you have another task dedicated for backing up a Hyper-V system).

You can exclude one or more VSS writers in the same way you exclude data from the backup. 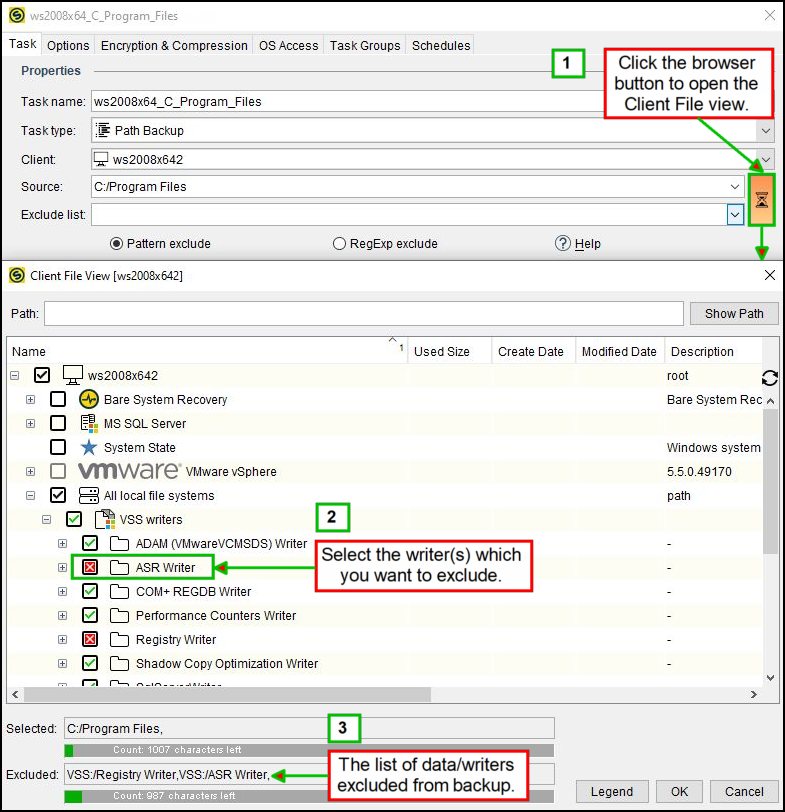 By default, VSS shadow copies (snapshots) are stored at the same location as the original data, for example, drive C has its shadow copy on C, drive D on D, etc. However, you may want to save your temporary VSS shadow copy to a different drive (e.g., one with a greater capacity or to organize all your snapshots in a separate location). In this case, you can change the designated drive for the VSS shadow copies to another storage area location (local drive).

The procedure differs depending on whether you want to change the storage area location on Windows Server OS or Windows Desktop OS.

On Windows Server OS, you can change the designated drive for VSS shadow copies as follows:

As an administrator, you can change the location and size of the storage area in the commad prompt by entering the following command:

For more information on how to use the command, see the Microsoft article Vssadmin resize shadowstorage.