Follow-up events allow you to start actions based on events happening on the backup server.

The following event chains can be combined:

To activate the follow-up events, enter the following commands in the shell/cmd.

In the Follow up field you can configure events that are started on the SEP sesam Server once the initial event is completed.

As of version 4.4.3 Grolar, you can use Migration task option to chose a follow up migration task. 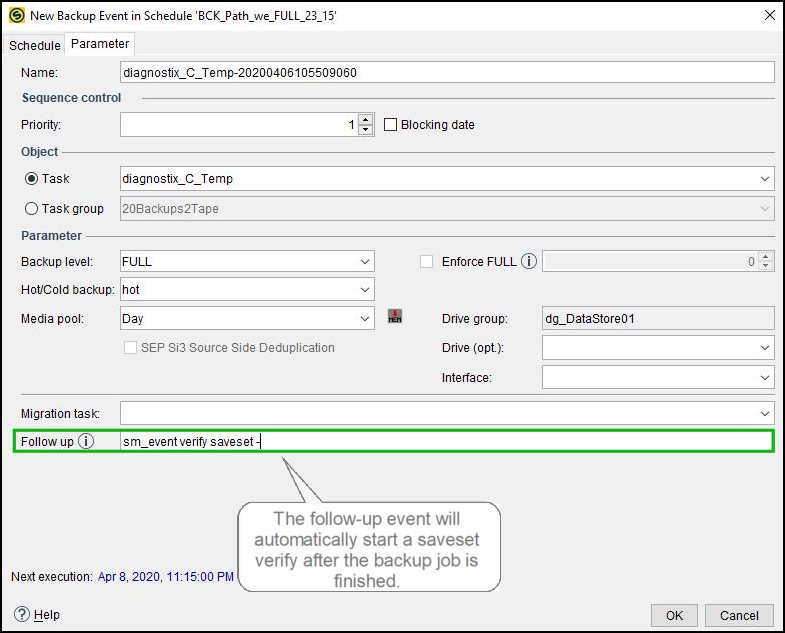 Testing events on the command line

The notation of the command has a special syntax:

The following example shows an sm_cmd command which then automatically starts a follow-up event to back up a task group:

In the following examples the elements within the angle brackets < > indicate that the enclosed element is mandatory and must be appropriately replaced by parameter or actual name. Do not type the angle brackets in the command line. Every follow-up command also requires the ending hyphen -. All specified tasks and migration tasks have to be configured in the GUI before the follow-up event is started. For example, first you configure a migration task and then you set up the event migrate saveset after the backup.

Verify saveset after the backup

To verify the backup, use the following command:

After the backup is finished, a restore is started and data is being verified. No data is written to the target system. To view the status of your verification job, go to the Main Selection -> Job state -> Restores and check the verification status.

Migrate or replicate saveset after the backup

First, create a migration task or a replication task. Once the required task is created, you can set it up as a follow-up event after the backup has completed.

The following command will start the respective migration after each completed backup task:

Migrate savesets after all backups in the group completed

First, create a migration task and then set it up as a follow-up event to start the migration for backup-group related savesets.

The following command will start the respective migration after all backups that are part of the group are completed:

Migrate saveset after the backup and delete it after successful migration

First, create a migration task. Once the required task is created, you can set it up as a follow-up event after the backup is completed by entering the following command:

The additional option "-r 1" will be passed to the migration task and the saveset will be deleted after successful migration.

Replace <migration_task> with the actual name of the migration task, as it is displayed in Tasks -> Migration Tasks.

Start a single backup task after the backup

To start another backup task after the scheduled backup is finished, specify the following:

Replace <task_name> with the name of the backup task and <target_pool> with the target media pool the data should be saved to.

To start another backup task after all backups of a scheduled task group are finished, specify the following:

Start task group after the backup

Sometimes you need to start a task group after the backup is finished:

Replace <task_group> with the name of the task group and <target_pool> with the target media pool the data should be saved to. With backup-level you can define F/C/D/I.

To start the target event on a different drive, specify the option -d:

Send notification after the backup, migration or restore

You can trigger a notification after the backup, migration or restore event is finished.

In the example below, the notification will be send to the username configured as backup within Configuration -> Email Settings.

For more information on e-mail configuration, see Email Settings. For details on how to send a SEP sesam daily protocol to an email account, check FAQ.