Data retention is the amount of time a backup is kept by SEP sesam. When you create a media pool, you set the retention time for the pool. Running respective backup tasks creates a backup chain on your backup storage consisting of a full backup, followed by differential and incremental backups, a backup metadata file, and may also include other dependent backups, such as migrated and replicated backups. Some INCR backups use CBT (changed block tracking).

What is retention time and EOL (End of Lifetime)

Retention time specifies the time period for which backup data is protected after it is written to the media, so that the savesets are preserved and available for restore. Data retention is important to ensure that all regulations and retention schedules are met. How long you should retain data depends on the nature of your business, as well as regulatory, legal, and other requirements.

SEP sesam provides automatic EOL (retention) management to ensure recoverability of the entire backup chain and protect against data loss, based on backup chain dependencies. You can also manually adjust the EOL of your data, as described in Changing Retention (EOL).

What are backup chain dependencies

Dependent backups are also classified by the respective depth of the dependent backups in the backup chain. The respective depth can be a measure of how many backups are required to complete the restore of a system, e.g. a VM, to a predetermined state.
SEP sesam provides the saveset tree view to determine dependencies and EOL of an FDI backup chain. This view shows a data structure that relates savesets to their dependencies. You should use it before manually changing the EOL parameter to avoid breaking the backup chain. For details, see Backup Chain Dependencies.

Automatic EOL adjustment
However, in some cases SEP sesam automatically adjusts the EOL to retain consistency of the backed up data and keep the backup chain readily available for restore. For example, it may happen that the expiry time of some savesets has already expired, but they have not been deleted due to one or more rules of the backup chain dependencies.

There are six main rules that lead to an adjusted EOL.

If the retention time is considered only from the perspective of an individual backup, it can ensure restorability of data only for that particular backup. To enable complete restore of data backed up in the backup chain, SEP sesam tracks all dependent backup savesets and manages their retention time according to their dependencies.

For example, INCR backups require all previous savesets (FULL, DIFF and INCR) to be available for a successful restore: INCR backup taken as the third INCR after the FULL requires the FULL, the first, the second, and the third INCR to provide complete restore capability. If a saveset is missing from the backup chain, data recovery to a specific point in time is not possible. For this reason, SEP sesam maintains control over the dependencies among the individual backup savesets and provides six rules for dependency-based automatic retention.

Rule #1: Full backups do not expire as long as dependent DIFF/INCR exist

For example, you set a media pool retention parameter to 30 days and run a FULL backup. This FULL saveset is initially kept for 30 days, e.g., until January 31. If a subsequent INCR or DIFF saveset in the chain has a longer EOL, e.g. an expiration date of February 3, the EOL of all previous savesets, including the FULL, is adjusted to the longer expiration date.

Rule #3: A decreased EOL of a DIFF/INCR saveset leads to reduced EOL of all dependent savesets

If the EOL of a DIFF or INCR saveset is decreased, SEP sesam decreases the EOL of all dependent savesets (FULL and other DIFF and INCR).

Rule #4: A too short EOL of DIFF/INC savesets leads to an increased EOL

If the DIFF/INCR backup detects that a saveset belonging to an FDI chain has an EOL that is too short, then any subsequent DIFF/INCR backup that runs on a pool with a longer retention time will increase the EOL of the saveset from that particular pool.

Rule #5: A new or migrated DIFF/INC backup results in an adjusted EOL for dependent savesets

Rule #6: The last successful backup or migration is automatically retained

What happens when the saveset expires

The protection of a saveset expires when its EOL is reached. The storage space of an expired saveset is not used immediately; SEP sesam uses the GET_OLDEST policy to preserve the data on the media for as long as possible. The expired saveset can be used again if the following conditions are met:

In the Media view in the GUI, you can check the column Media EOL changed by that shows EOL-changes made via the automatic EOL adjustment by Backup ID/Saveset ID, as well as the EOL that the user changed manually. The modified EOL is also recorded in the main log and can be generated for audit trail purposes, see Audit Logging.

The EOL property can be managed for three object types:

The expiry date for a single saveset:
The date the data was written to the media + the retention time of the media pool
If a saveset is part of a backup chain, its EOL follows the rules of dependency-based retention; the EOL of a previous saveset in the chain must be the same or longer to enable complete restore of the data.

Shorten retention
Shortening the Saveset EOL results in a new expiry date that applies only to the selected individual saveset.

Delete a saveset
(see also: Deleting savesets, backups or tape media)
Right-clicking the saveset -> Saveset -> Delete Saveset deletes the selected saveset(s), unless the saveset(s) is/are part of a backup chain; in the latter case, the entire backup chain is affected. Deletion can be executed immediately or delayed until the next purge.

The expiry date for all data belonging to the same backup, including migrated and replicated savesets.

Extend retention
If you extend the Backup EOL, SEP sesam automatically increases the EOL of all dependent savesets (FULL and other DIFF and INCR).

Shorten retention
Shortening the Backup EOL only adjusts the EOL of the savesets that have a longer EOL than the newly set date, while the savesets with a shorter EOL are not affected (their EOL remains unchanged).

Delete a backup
(see also: Deleting savesets, backups or tape media)
Right-clicking the saveset -> Backup -> Delete Backup deletes all data belonging to the same backup (the entire backup chain) that will be deleted immediately or with the next purge.

The tape media EOL may also depend on dependent FULL/DIFF/INCR savesets stored on other media or even data stores.
Only when all savesets on the tape have expired and the tape is not locked (write-protected) can the tape be used again.

Extend retention
Extending the Media EOL results in a new expiry date that applies to all savesets on the tape.

Shorten retention
Shortening the tape Media EOL applies to all savesets on the tape.

Expire retention
(see also: Deleting savesets, backups or tape media)
If the tape is loaded in the drive or library, you can erase the tape. Right-click the Expire function in the Media view or display tape properties and click Expire Media. This action affects the entire tape. The metadata of the tape is removed and the tape is reinitialized. Deletion can be executed immediately or delayed until the next purge.

You can use the GUI to modify the EOL parameter in several different ways:

You can also lock your backups in the GUI and SEP sesam Web UI to prevent them from being deleted after the retention time has expired.

There are several ways how to lock a backup in the GUI: 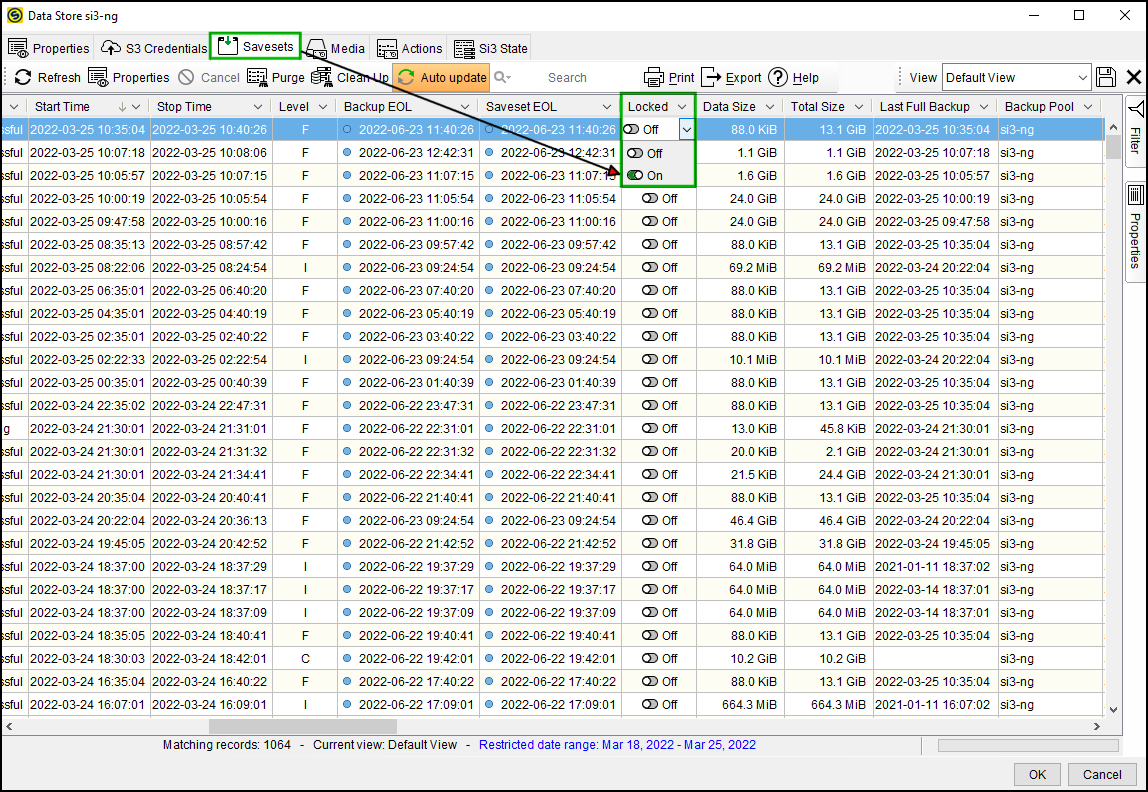 You can access the Web UI in one of the following ways: 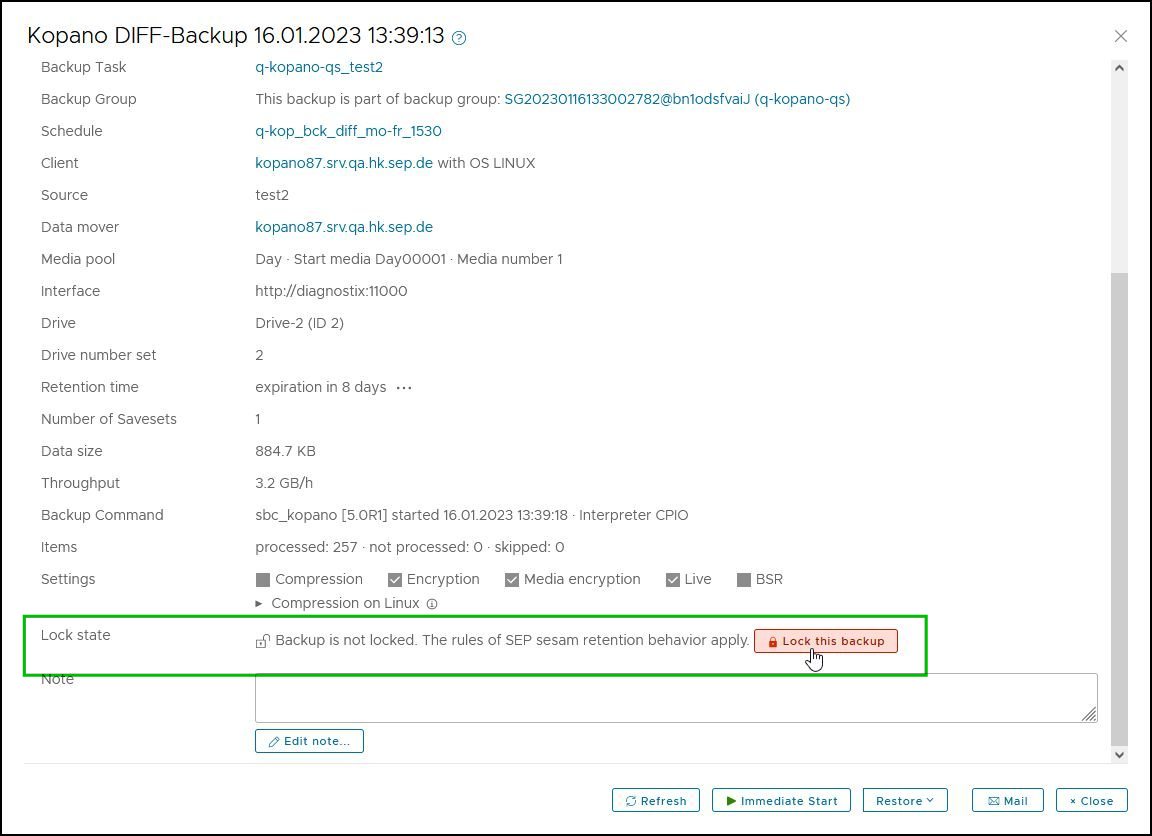