SEP sesam also allows you to manually adjust EOL for individual saveset (saveset EOL) that is stored on data store and for all backup-related savesets (backup EOL). For tape media, extending the backup EOL might result in extending the media EOL of a tape. For the same reason as with the dependency-based automated retention, SEP sesam will automatically adjust EOL of backup chain savesets if required. For details, see Manual EOL adjustment.

When a saveset is stored on tape, every stored saveset has its own saveset EOL, but this does not represent the actual expiration date of the tape. Its expiration date corresponds to the maximum retention time (the longest EOL) identified on tape. Only when all of the savesets on tape have their retention time expired and the tape is not locked (write-protected), the entire tape is eligible for re-use. For details on how manually extending EOL affects EOL of the tape media, see Manually extending EOL.

Once a saveset's end of life is reached, its protection expires. The storage space of an expired saveset is not immediately used; SEP sesam uses the GET_OLDEST policy to preserve the data on the media for the longest possible time. The expired saveset can be re-used when the following conditions are met:

In some cases, SEP sesam automatically adjusts EOL to retain the consistency of backed up data and ensures successful restore. As of v. 4.4.3 Grolar, every time EOL is modified, the corresponding information is shown in main log.

If DIFF/INCR backup detects that a saveset belonging to a FDI chain has too short EOL then any consecutive DIFF/INCR backup that is running on a pool with longer EOL will increase the EOL of the saveset from the respective pool.

With Grolar, you can enable extended retention period for migration by using a specific GLBV:

As of SEP sesam Tigon V2, the following commands can be used to set the desired behavior:

Example
COPY backup in pool MONTH (EOL: 32) fails. SEP sesam checks for previous successful COPY backup in the same pool and increases its EOL unless the backup EOL is not sufficient, e.g., a migrated saveset exists in pool YEAR (EOL: 375).

Example
FULL backup in pool MONTH (EOL: 32) fails. SEP sesam checks for previous successful or with warnings FDI backup chain in the same pool and increases the EOL of the whole chain (FULL/DIFF/INCR backups) unless the backup EOL is not sufficient, e.g., a migrated FULL saveset already exists in pool YEAR (EOL: 375).

It is not recommended to manually adjust EOL. This will override the EOL that was defined by the retention time (in days) in media pool configuration and started on date a saveset is written to the media. The following options should be used for special cases and exceptions, for example, to allow premature deletion of an individual saveset, or to increase the retention time of a particular backup chain to be stored longer than specified by current EOL.

Extending EOL can be used for special cases, such as increasing the retention time of a particular backup data that has also been migrated and is stored on different media pools.

You can use the saveset tree view in GUI to determine dependencies and EOL of an FDI backup chain. Use this overview prior to manually changing EOL parameter to avoid breaking a backup chain.

The saveset tree displays a saveset related details together with potential dependent savesets belonging to the same backup chain. The saveset details are read-only. By providing an overview of the backup chain, you get insight on restorability of backups. 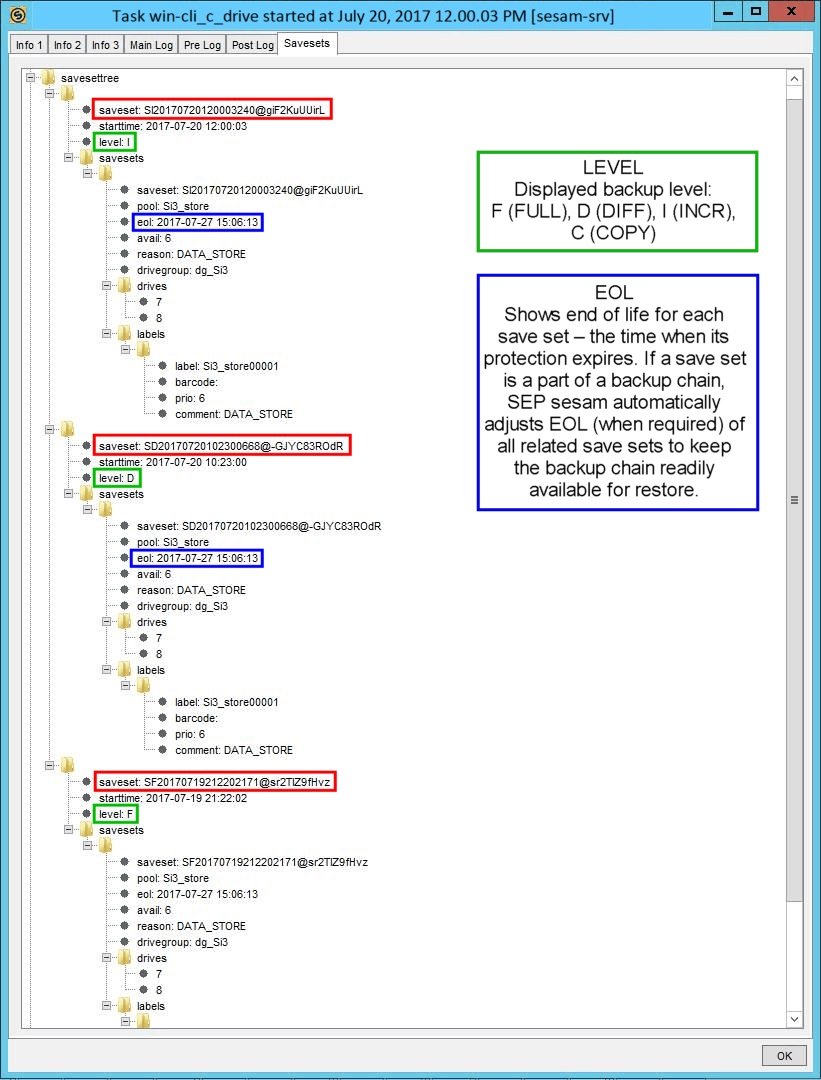 The saveset tree displays all savesets belonging to the same backup chain with the following details:

avail
The priority number, based on the location of the savesets. It is useful for identifying savesets that are readily available for restore. For example, a saveset in media pool DAY (data store) is migrated to another pool DeDup and then migrated to tape. The tape will have the lowest avail/priority because it is not readily available for restore. Check also the Availability in the Status at the end of the tree view, which is calculated from the avail of all displayed savesets. See below Availability for details.

reason
Explains the above avail – availability of individual savesets for restore. The following information shows the relation between the location and avail/prio. Priority is assigned numerically, with 1 being the lowest priority and 6 (or 7 if called with a specific pool) being the highest.

labels
Displays an internal identification of a saveset (a media pool name and a 5-digit number), a potential barcode, prio (numerical representation of the availability, see above item), and comment.

status
Displays the summary of savesets availability – status, message on availability and a numerical representation. For example, as soon as 1 saveset is migrated to another pool and deleted from the original pool, the availability will be lowered.